I've been getting the same challenge put to me frequently; can you show us what you could do with some cheap vintage gear.

I've been on the lookout for suitable contenders and I snagged a Korg SuperDrums (DDM-110) a while back and a Korg DW-6000 recently.

I set the max budget for this to £200 and these pair cost a total of £190, so I thought that matched the criteria in a world where vintage synths can cost thousands or tens of thousands!

More details for the nerds:

The Super Drums were designed to be as affordable as possible at a time when programmable, digital drum machines were still very expensive. In 1983 the LinnDrum was listed as £2,650 here: http://www.muzines.co.uk/articles/linndrum/5884

With 9 uneditable samples (8 bit / 15.625kHz*) and with only din sync and no mixer or individual outs, this unit is a challenge to say the least.

*The specs are taken from Paul Bundock's "Bit-depth and Sample Rate 1984-style" assessment of the schematics from this 2001 article: https://www.soundonsound.com/reviews/korg-ddm110

The Korg DW-6000 is a hybrid, six-voice polysynth from 1985. The oscillators are digital samples of additive waves that emulated the spectra of various acoustic instruments. With two oscillators and 8 waves there are 44 unique combinations (if my maths is correct) and so that's surprisingly flexible. There's also a noise generator to boot.

There are two ADBSSR envelopes, (VCF / VCA), which are like an ADSR with an additional level and decay in the middle (break point / slope). The filter EG polarity can also be reversed.

There's a basic LFO ("modulation generator") with delay that can modulate the oscillators and filters, but that only has one fixed waveform (presumably sine or triangle).

There's a stereo chorus at the end of the chain to widen the sound considerably. 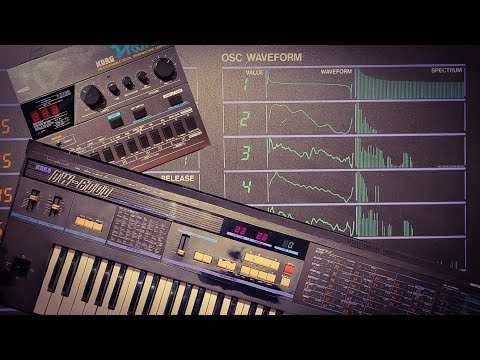 I've been getting the same challenge put to me frequently; can you show us what you could do with some cheap vintage gear. I've been on the lookout fo...