The Beatles - Let It Be - Album Version - Guitar Cover

George’s searing solo from the album version of “Let It Be”! I cut together all the guitar bits from the original recording for a condensed version of the song for this cover!

Interestingly, photographic evidence of the January 4, 1970, “Let It Be” overdub session suggests that George played his sanded 1965 Epiphone Casino for the album version’s lead guitar (see photo here http://www.beatlesebooks.com/let-it-be-song). At some point in 1968, he sanded the once-sunburst Epiphone Casino, much like John. George’s Epiphone was rarely seen during the latter portion of The Beatles career (1968-1970), as he favored his Gibson “Lucy” Les Paul and Rosewood Telecaster. However, the photographic evidence combined with the slightly nasal P90 tone of the recorded “Let It Be” guitar suggests that George brought out his Casino for “Let It Be”! For this cover, I used my natural Epiphone Casino with my usual John Lennon black knob replaced to more closely match the aesthetics of George’s Casino (although George’s had a Bigsby - hard to put that in temporarily!)

The Beatles recorded the basic track of “Let It Be” on January 31, 1969. The chosen recording, Take 27, underwent a few overdubs before release. George decided to re-record his guitar, and on April 30, 1969, he recorded a Leslie speaker guitar part, similar to the original take 27 version. This guitar ended up on the single version release of “Let It Be”. When polishing the tapes for the “Let It Be” album in early 1970, George decided to record his lead guitar yet again. This version, recorded on January 4, 1970 featured a stinging solo, a brief guitar riff during a verse, and further lead guitar at the end of the song.

George’s lead guitar work is mostly straightforward in this song and requires little exposition here with regards to interesting nuances. It is important to note the notes that George explicitly plucks versus those that he continues sustained from another note. During the solo at 0:24, he accidentally lets a few open strings ring.

The Beatles - Let It Be - Album Version - Guitar Cover 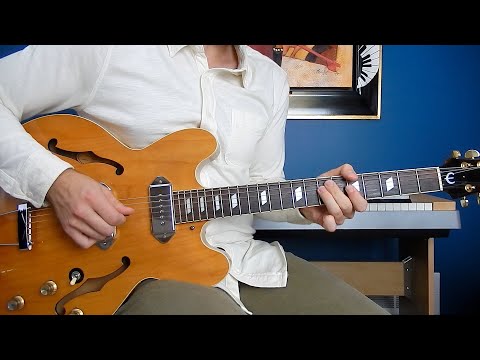 George’s searing solo from the album version of “Let It Be”! I cut together all the guitar bits from the original recording for a condensed version of...