The lynx stalks its prey, sneaks up on it, and attacks with a quick pouncing attack. Bobcats are like lynxes with a few differences. Have you ever seen a lynx hunt down a large deer? What do you think a bobcat would do if it entered a chicken coop? If you want to see these two cats in action, keep watching, as we look at the rarest hunting moments by the lynx and bobcat captured on camera.

The range of the Eurasian lynx is extensive, extending from Western Europe to Central Asia. Lynxes are predatory cats that range in size from 80 to 120 centimeters in length and 50 to 70 centimeters in height. They can weigh between 15 and 25 kg. The lynx's large tufts of hair on the tips of its ears are a distinguishing feature. These tufts, which can be up to 5 centimeters long, are why the animal is also known as "Brush Ears." The lynx's unique whiskers, which act as a sound amplifier, are equally stunning. The lynx is a carnivore that eats only meat. Despite this, the animal isn't picky about what it consumes. The lynx hunts cloven-hoofed species including roe deer, chamois, and mouflon, as well as young red deer and reindeer, depending on the locality and availability of prey. Small mammals like hares and rabbits, as well as smaller predators like foxes, are on the menu for the lynx. The lynx hunts primarily at night when its prey is also awake.

This beautiful Eurasian lynx lives in captivity and right now it’s exploring its enclosure. I must say, this isn’t a very big enclosure for the cat to explore and roam around in. The Eurasian lynx reminds me somewhat of the Caracal. The Caracal doesn’t have the same whiskers, but the ears are very similar. These cubs are playful and enjoy a day out in the open. George was the first Eurasian lynx from Romania translocated to Slovenia as part of the life Lynx project. Soon after his release, he crossed the border to Croatia, before returning to Slovenia. This video was recorded in Croatia, near his first kill site. The Eurasian lynx can spend hours sitting and waiting for prey, just like the lynx in this video. I guess patience is truly a virtue when you’re a lynx.

This lynx ambushes an unsuspecting deer, and when it jumps on the deer’s back, the deer takes off with the cat on its back, it almost looks like the cat is riding a bull during a rodeo. Bite marks in the throat and trachea of an animal killed by a lynx will be visible upon closer investigation. Small holes produced by the lynx's keen teeth can also be seen in some carcasses when the throat and trachea are dissected. The canines of the lynx are 25 to 35 millimeters apart. Hidden cameras capture a vicious ambush by a lynx when it jumps a large deer and takes it down. The element of surprise worked marvelously to the lynx’s advantage and allowed him to make the kill. Bears are excellent scavengers, and the Eurasian lynx rarely has a chance when it tries to get scraps the bears leave behind. Even more so when they are outnumbered 1 to 5 as is the case in this video. After feeding for a while, the lynx notices something is approaching in the distance.

The lynx doesn’t take any chances and walks away from the scene. It’s probably a good thing, because moments after, a mama bear and her four cubs arrive at the kill site. The bear family eats and takes the entire carcass with them when they leave. The lynx returns to the kill site, only to realize that all the food is gone. This lynx has made a kill and is dragging it through the foliage. I’m not sure if it wants to hide the kill or eat it. In Slovenia's northern Dinaric Mountains, it's breeding season for the Eurasian lynx. The remains of a kill - a red deer calf - are being monitored by a pair of lynx in this video. Lynx are generally solitary, however, during mating season, the pair stays together for roughly a week. They came back multiple times until the carcass was entirely devoured. 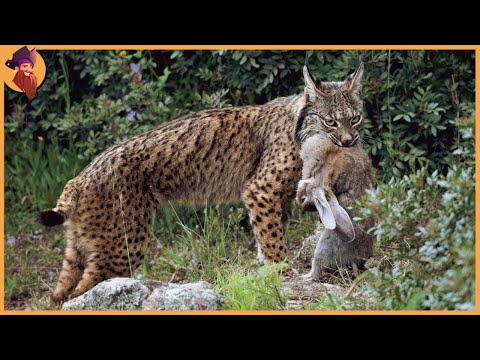 The lynx stalks its prey, sneaks up on it, and attacks with a quick pouncing attack. Bobcats are like lynxes with a few differences. Have you ever see...