With increasing innovation and advancements, vehicle technology has undergone a significant evolution. OEMs update their models as facelifts or generation upgrades to keep in the race with their competitors by providing unique features. One of the features, Touch Screen Infotainment Systems, which were treated to be a luxury back then, have become a necessity. So, here is a list of some pocket-friendly vehicles from the budget segment which are equipped with a touch screen infotainment system from the factory in their top variants.


Maruti Suzuki Alto 800
Touch screen Infotainment system alto 800
VXi+ variant : Rs. 4.33 Lakh
First in this list of cheapest cars with Touch Screen is the Maruti Suzuki Alto 800. It remains one of the most popular budget cars in India and has been holding up its legacy since the early 2000s. It has seven variants ranging from Rs. 3.15 Lakh to Rs. 4.95 Lakh, powered by a 3 cylinder, 796 cc, F8D Petrol Engine under the hood. It is equipped with a 7 Inch Maruti Suzuki Smartplay Studio Touchscreen Infotainment System having plenty of modern features like smartphone connectivity, navigation and vehicle updates in its VXi+ variant.


Datsun Redi-GO
Apple CarPlay Android Auto Infotainment Datsun redigo
T(O) variant : Rs. 4.54 Lakh
The Datsun Redi-Go is one of the three different offerings by Datsun, ranging from Rs. 3.98 Lakh to Rs. 4.96 Lakh, powered by a 3 cylinder, 799 cc Petrol Engine under the hood. It is equipped with a highly capable 8 Inch Touchscreen Infotainment System with a physical volume control knob, Apple CarPlay and Android Auto, Voice recognition and Reverse Camera in the range-topping T(O) variant. However, a larger screen when compared to the Alto 800's infotainment system is a charm to use.


Datsun Go
Touch screen infotainment datsun go
T Variant and higher : Rs. 5.75 Lakh
Datsun Go is the first car from the Renault-Nissan Group to be brought to India under the Datsun portfolio. It has bagged the title of being the first in segment CVT offering powered by a 1.2L petrol but still hasn't managed to fetch decent sales as it hasn't seen a generation upgrade since its launch. Datsun still has hopes and updated it with a few features, including an upmarket 7 Inch Touch Screen Infotainment system which is surprisingly more petite than the Datsun Redi-Go's Infotainment system. This infotainment system is available in T and T(O) Variants priced at 5.75 Lakh and 5.96 Lakh, respectively.


Renault Kwid
Cheapest Cars With Touch Screen
RXT(O) variant and higher: Rs. 4.9 Lakh
Renault Kwid is considered to be one of the most Value For Money cars in this segment, starting from Rs. 4.25 Lakhs because of its SUVish style language in perfect proportions packed with features. It is powered by a refined 0.8L or a 1.0L Petrol motor with adequate performance. The Kwid features an 8-inch mediaNAV Infotainment system with Android Auto, Apple CarPlay, a Reverse Camera with Guidelines and Voice Recognition in the RXT(O), RXL+, Climber(O) and RXT(O)+ variants. 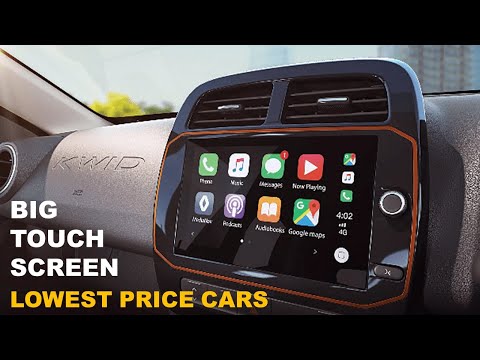