How is this particular trumpet explained? One way you could say it is that capacitors resist a change in voltage. For a 'trumpet' to have any meaning whatsoever it needs to be specifically and precisely explained how it was derived. It also needs to be shown that this rising amplitude is only produced from a single pulse. To then actually make it significant it needs to be shown that this rising amplitude, whenever it starts actually ringing DOWN, is actually over time returning more power than was in the initial pulse.

To derive a trumpet with resonance is to simply pump an LC tank AT it's resonant frequency, stop pumping and let it ring back down quickly, then start pumping again. Another way is to rectify an AC output and measure the AC side while it's charging a capacitor.

In a DRSSTC the switches are actually switching at the LC tank frequency with precision. The longer they are allowed to switch and pump power into this tank, the higher and higher this resonant amplitude is going to rise until something gives, or a maximum input voltage is reached. In a setup like mine I'm just discharging into an inductor paired with a capacitor at much less precise timing based around when the gap wants to fire given the variables. When you pulse an inductor like this, it will ring down at its natural resonant frequency. This basically happens with anything like striking a tuning fork. You don't need to keep striking the tuning fork unless you want to feed it more energy and increase the amplitude (a trumpet), you strike it one time and it rings down. I'm striking the L1 one time and it's ringing down.
Imagine the difference between lightly tapping a tuning fork at its resonant frequency until the amplitude of the ringing rises, and striking it one time hard. This is going to be the nature of the primary circuit L1. We then have our adjacent tuning fork L2 where things really matter if we assume an ideal switching on the primary circuit. Dumping thousands of volts into the primary you can expect some output on the secondary as it sees this changing magnetic field. 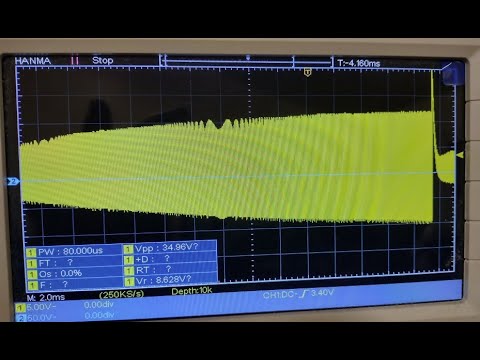 How is this particular trumpet explained? One way you could say it is that capacitors resist a change in voltage. For a 'trumpet' to have any meaning ...