I'm always snooping around on eBay for the weird and wonderful - and recently came across this strange looking amp head. It was listed as an "18W TMB" amp...but that was about all I knew. After a lot of digging and sleuthing though, I was able to figure out that this began its life as an amp kit provided by German company Tube-Town. The big giveaway was the Hammond output transformer - as whilst several companies manufacture a TMB amp kit, only they provide Hammond transformers as standard.

After a few emails, we established that it was indeed a Tube Town kit, but whoever had put it together upgraded some of the components (notably the tone caps, as TT have never provided Sozo caps with their kits). So what I ended up with was a turret-board hardwired Marshall 1974-style amp, with one side 'original', and the other modified with a TMB tone stack and master volume. Cool, eh?

It sounded cool, but something about it wasn't sounding quite right compared to vintage examples of that circuit I'd heard online. So I took it to my local amp tech Mike Devine, who both serviced the amp and also compared the TT wiring schematic to what was actually in the amp - and in the process, found a fair few components that were either the wrong value, or just...added. The speculation is that this kit was soldered together by an expert builder, but somewhere along the line it's been used as a bit of a test-bed for various mods, some of which had been left in. So Mike restored it to the schematic for me, using some premium components along the way.

So I now have the exact TT 18W TMB amp circuit....'original' on one side, TMB on the other. It's powered by 2x EL84s, with a EZ81 rectifier, so it definitely has a spongy feel to it compared to a higher powered EK34/KT66 Marshall circuit, and some Voxy tendencies in the high end. But it's a killer sounding thing - and as is the way when buying other people's kits on eBay, you can end up with a phenomenal amplifier for peanuts money.

What do you think? Classic jangly Marshall tone? Would you prefer ceramic speakers to tame the fizz? Comment below! 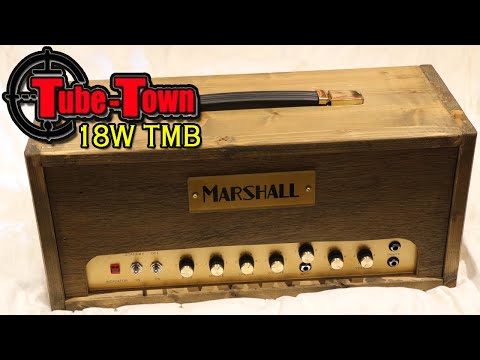 I'm always snooping around on eBay for the weird and wonderful - and recently came across this strange looking amp head. It was listed as an "18W...