New from Universal Audio! Three legendary amps in a box that sound great. Nathaniel takes 'em for a spin! Check it out!

More about Universal Audio!
Universal Audio, Inc. was founded alongside the United Recording Corporation by Bill Putnam Sr. in 1958. Putnam’s intention was for Universal Audio to serve as United’s manufacturing arm, with the company initially operating out of the United Recording premises at 6050 Sunset Boulevard in Hollywood, California. During its first few years Universal Audio produced a number of tube-based audio processors, the most famous being the 610 preamplifier. These processors also served as components in custom recording consoles built by Universal Audio for various studios. In 1961, United Recording acquired Studio Supply Co. and rebranded it as the Studio Electronics Corporation (SEC). The focus of SEC was the creation of fully-fledged studio systems built around the equipment produced by Universal Audio. In October, 1961, all manufacturing was moved to Western Recorders, a nearby company in which United Recording had gained a majority stake. While Universal Audio as a company was eventually absorbed by Studio Electronics in December, 1965, the brand itself continued with individual products retaining the Universal Audio label. This merger also coincided with another relocation, this time to a 8,100 square foot premises at 11922 Valerio Street in North Hollywood. Studio Electronics acquired two additional brands in 1967: Teletronix and Waveforms. The acquisition of Teletronix from Babcock allowed SEC to begin production of the popular LA-2A compressor.[6] Waveforms on the other hand expanded the product catalog into the area of precision audio test instruments. In light of these acquisitions, and in the anticipation of more, SEC was rebranded as United Recording Electronics Industries (UREI). Products would continue to carry their own brand names alongside the UREI badge until the mid-1970s, at which point the Universal Audio label was removed from Revision H of the 1176 compressor. As part of Putnam's sale of United Western Recorders, UREI was acquired by JBL in 1984. JBL released a number of products, primarily equalizers, with the UREI label.

Do you own one of these pieces of gear? Want to sell or trade it for something new?
We buy and trade! - https://www.chicagomusicexchange.com/pages/sell-and-trade-your-gear

Check out our Giveaways page to win gear! - https://www.chicagomusicexchange.com/pages/giveaways 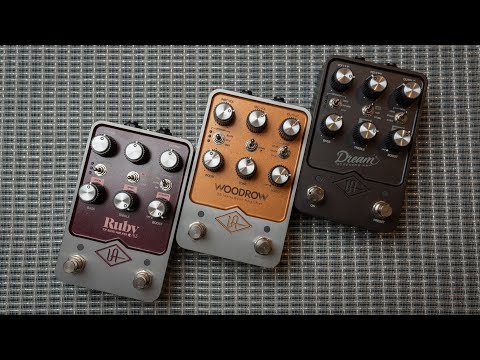 New from Universal Audio! Three legendary amps in a box that sound great. Nathaniel takes 'em for a spin! Check it out! SUBSCRIBE FOR MORE CHICAGO MUS...