U.S. House Speaker Nancy Pelosi and a congressional delegation lay a wreath at the Tomb of the Unknown Soldier in Warsaw, Poland, May 2, 2022.
_________
READ MORE: Ukrainian officials said they expect more civilians will be able to evacuate from the besieged city of Mariupol on Monday.

President Volodymyr Zelenskyy said in a video message that more than 100 civilians were able to leave Sunday, and that they were headed to Zaporizhzhia, about 200 kilometers away, although their progress was reported as slow.

With Russian troops taking control of the rest of Mariupol, hundreds of civilians and an estimated 2,000 Ukrainian troops have been holed up at the Azovstal steel works. Multiple earlier attempts to evacuate civilians from the site fell apart with Ukraine accusing Russia of shelling evacuation routes.

U.S. House Speaker Nancy Pelosi, who along with six other Democratic lawmakers made an unannounced visit Saturday to Kyiv to meet with Zelenskyy, held talks Monday in Poland with President Andrzej Duda as she pledges support for NATO allies in their efforts to bolster Ukraine against Russia.

VOA’s Myroslava Gongadze spoke with Pelosi during the visit in Poland Monday. Pelosi told VOA that Russia has "...done enough to justify the strongest possible military response, the strongest sanctions, to make the case that this is not tolerable."

"And we shouldn't do anything less because of a threat from Russia," Pelosi said. "They have already delivered on their threat that killed children and families, civilians and the rest. And as I said yesterday, we don't respond to a bully."
_________
LINK: https://www.voanews.com/a/ukraine-expects-further-evacuation-of-ukrainian-civilians-from-mariupol-steel-plant-/6553359.html

Voice of America (VOA) is the largest U.S. international broadcaster, providing news and information in more than 40 languages to an estimated weekly audience of 236.8 million people. VOA produces content for digital, television, and radio platforms. It is easily accessed via your mobile phone and on social media. It is also distributed by satellite, cable, FM and MW, and is carried on a network of approximately 3,000 affiliate stations.

Since its creation in 1942, Voice of America has been committed to providing comprehensive coverage of the news and telling audiences the truth. Through World War II, the Cold War, the fight against global terrorism, and the struggle for freedom around the globe today, VOA exemplifies the principles of a free press. 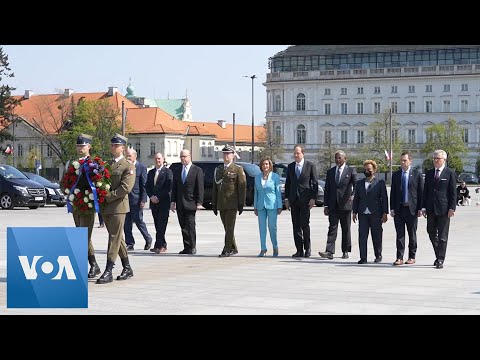