In this episode, Eddie Bazil discusses using Transient Shapers in place of EQ and provides six practical examples of the ways that each of the various tracks in your mix can benefit.

Presenter: Eddie Bazil - Biog
Eddie Bazil launched his music industry career at the age of 17 as a synth programmer for a range of Electro / New Wave bands including Art Of Noise, Spandau Ballet, Pet Shop Boys, Bobin, Paul Dee, DJ Krush, DJ Shadow, Jets Orchestra. By his 20s he was working as a sound designer for Akai, Roland, Emu/Ensoniq, eventually signing on exclusively with the latter. Later, due to a growing demand for software instruments and libraries, Eddie started to develop libraries for various software manufacturers, including Native Instruments, Kiesel, Sound Effects Library, Arturia and Propellerheads.

A meeting with Phil Allen, a Capital Radio DJ, resulted in the company Samplecraze, which Eddie has spent 20 years developing as an educational resource. At this time he trained in music production and soon gained a number of prominent contracts working with some notable artistes such as Busta Rhymes, Greensleeves, 9 Bar, SFP, Sleeveless, Chris Campbell and Gam Productions. He contracted to Island Records and Chrysalis as a producer and remixer, plus was commissioned to write the score for Macbeth that ran at 2 Way Mirror at Alexander Palace for the Cambridge Shakespeare Company. His ongoing development of Samplecraze has led to him offering educational workshops and classes, releasing four books via PC Publishing, and becoming a contributor and Forum moderator for Sound On Sound.

Recently he has established The Audio Production Hub for online education and been invited by the Recording Academy to become a Grammy judge.
https://eddiebazil.co.uk
https://samplecraze.com
https://theaudioproductionhub.pivotshare.com

About The Recording & Mixing Podcast Channel
On this channel you’ll find shows packed with hints and tips about getting the most out of the recording, mixing and mastering process. 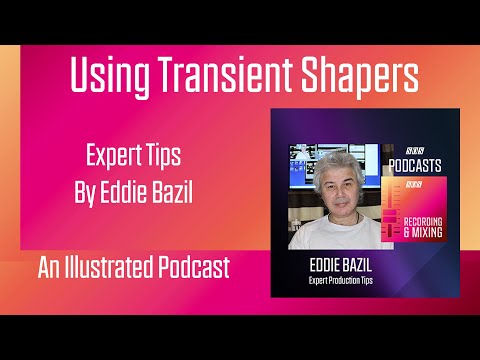