In the early morning of October 26, 1966, an alarm coming from Damage Control Central suddenly engulfed USS Oriskany. The mighty ship was stationed at the Gulf of Tonkin, off North Vietnam, and a fire had just started. The loudspeakers suddenly reverberated throughout the carrier: (QUOTE) "Fire, fire, fire in frame 42! This is no drill! This is no drill!"

A magnesium flare had exploded on the hangar deck, and several aircraft were in flames and surrounded by a significant amount of flammable materials.

As 19-year old fireman Claude Harper tried to call his superior, thick smoke quickly began to fill his room, and desperate crew members ran for their lives, meeting relentless fireballs in the passageways.

It was one of the worst shipboard fires ever registered after World War 2 broke out, but the brave and heroic crew would not let the ship go down without putting up a fight.

In the words of author Geoffrey Norman: (QUOTE) “There are lucky ships and jinxed ships, but the Oriskany was neither. Or perhaps it was both.” 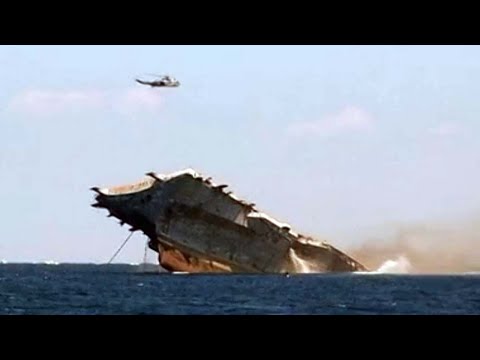 In the early morning of October 26, 1966, an alarm coming from Damage Control Central suddenly engulfed USS Oriskany. The mighty ship was stationed at...