Rusty Bowers, speaker of Arizona’s House of Representatives, testified on June 21 during a public hearing before the House committee investigating the Jan. 6 attack.

Schiff began his questioning of Bowers — a self-described conservative who testified that he had wanted former President Donald Trump to win the 2020 election — by asking about a statement just released by Trump that claimed Bowers had told him the election was rigged.
“Anywhere, anyone, anytime has said that I said the election was rigged, that would not be true,” Bowers responded.

Among the requests that Bowers said Trump made of him was that he remove and replace Arizona’s electors to stop the certification of Joe Biden’s win in Arizona. Bowers said it ran counter to his oath to the Constitution and that he would “never do anything of such magnitude without deep consultation with qualified attorneys.”

“It is a tenet of my faith that the Constitution is divinely inspired. My most basic foundational beliefs,” he went on to say. “So for me to do that because somebody just asked me to, is foreign to my very being. I will not do it.”

Bowers said that when he met with Trump attorneys Jenna Ellis and Rudy Giuliani, he pressed them for names of people they claimed had voted illegally in Arizona, but they never had any evidence, just “lots of theories.”

The hearing was the fourth of several planned by the Jan. 6 committee to present its findings to the public. It focused on Trump’s efforts to pressure state legislators and local election officials to change the results of the 2020 presidential election. In the year since its creation, the committee has conducted more than 1,000 interviews, seeking critical information and documents from people witness to, or involved in, the violence that day.

Stream your PBS favorites with the PBS app: https://to.pbs.org/2Jb8twG
Find more from PBS NewsHour at https://www.pbs.org/newshour
Subscribe to our YouTube channel: https://bit.ly/2HfsCD6 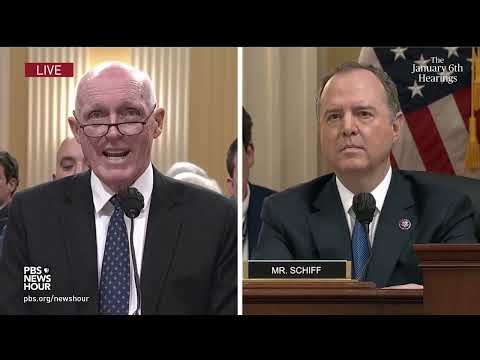 Rusty Bowers, speaker of Arizona’s House of Representatives, testified on June 21 during a public hearing before the House committee investigating the...