So let's start with the first one change in the system. It's gonna be in both directions. I've helped talk guys through who are now 62 years old. He and his wife have moved from their big four bedroom, three bath house into the city. They're empty nesters now. They're gonna be retiring in the next few years. They're now in like an 800 square foot apartment.

They had a REL 20 years ago that was, you know, half the size of this table and a big system that no longer suits their needs or their goals. They're gonna be doing a lot of travel. They want to go out and eat good food at night and be able to walk to it. So their life has compacted. I've heard exactly the opposite. You know, I had a little place when I was 30 in the city, got married. We've moved out to the burbs. Now I'm in long island, I've got four bedrooms, three baths. So whatever that change is, systems get much more sophisticated, not necessarily more expensive or not necessarily bigger, but they get faster.

Right. I spoke to a guy the other day. He had a 25 year old pair of big Vandersteens. He had just sold those and moved to a pair of Dynaudios, six and a half inch two ways that are fantastic.They're really, really good. They're very fast and articulate. He needed to actually get bass back and he needed to get something that was really quick and tuneful and would blend with the system.

So those are the system changes that you need to be aware of. And those are really good prompts. If any of those things are resonating for you, it's time to talk really fast subwoofers with somebody. The environment itself changing.

We sort of touched on it. If your physical space has changed, you may all of a sudden need a subwoofer and you were maybe even thinking about it beforehand, but then you move into a larger room and you start envisioning the things that can happen in this room. And all of the thought processes start to jumble together.

So always good, whenever you're doing anything with the system, really, really important to understand, not just what gear you have. You really want to be considering a partnering sub for, for what you're going to wind up with in the next year or two.

You never want to spend, you know, anything, whatever it is, a thousand dollars, $5,000. You never want to spend any significant money on a subwoofer shooting at the last war. Right, you don't want to be solving last year's problem. You want to be anticipatory, have a plan, go out, do some listening, read a lot, but really figure out where it is that you wanna wind up. Right? If it's a pair of Wilson Sabrina, X's at 20 grand and they're not huge, but they sound fantastic.

Great. Know that we've got two or three, depending on how big the room is. We've got two or three different solutions for you on that score. So it's really important to be solving the problem that you're going to be living with over the next arc of your life.

And then the last one, you know, what is going on with your expectations of a system? And this one happens all the time for people who've fall in love with really high quality reproduction. It's a journey. It's not one quick, oh, I did this and it's the perfect solution and I will cheerfully do this for the next 30 years. It's just not the way it works. It's a live sport. Your understanding of what matters evolves. Your ears will get better.

I don't mean your hearing will improve when people talk about somebody with great ears, we're talking about listening acuity, that is a developable skill. So as you understand what to listen for and what real instruments sound like in real spaces, how the reproduction of the space and the instrument is really critical to you as all of those things.

evolve RELs become much more interesting. Yeah, they're great subwoofers. They, they make great bass. That's about one and a half percent of what we do. What we really do is transform systems from sort of static things that do the basics into things where music becomes alive.

The venue that it's played in the time that it was recorded in. I have a phenomenal recording live at the village Vanguard by a jazz trombonist named JJ Johnson. It's one of the best live recordings I've ever heard in my life. And it's so raw. And one of the things that makes it so freaking good is you can hear th.... 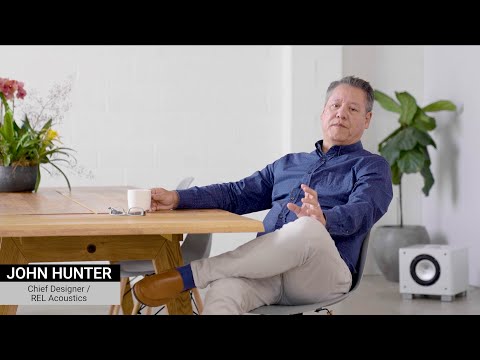 Learn more about REL Acoustics at https://rel.net/ So today we're gonna help sort out why do you need a new subwoofer. When is the right time to do it...