This video from Ziztel is an introduction to our ZADS Addressable Loudspeaker System. Ziztel design and manufacture communications systems for life safety critical applications, primarily for defence, oil & gas, and nuclear industries. The ZADS system enables remote individual loudspeaker supervision and associated volume level setting from a central management position. The ZADS system comprises of two basic components; the ZADSC-02 Head end (located in the host central PAGA rack) and the ZADS-ZLSM-2 Outstations; located at each target loudspeaker position. The ZADS-ZLSM-02 is available in a number of executions including: weather-proof IP66, ATEX/IECEx certified for potentially explosive atmospheres and units that are embedded inside the loudspeaker enclosure. Conventional PAGA monitoring only checks the field-cable critical path, whereas ZADS supervision monitors the entire network including loudspeaker devices. The field-cable architecture follows a ‘free topology’, enabling self-healing loop, star, tree & branch networks. ZADS is non-invasive and operates over the established standard loudspeaker lines. No additional field cable conductors or local power supplies are required. The ZADSC-02 host controller fits between the rack power amplifier and field loudspeaker networks. The package works with either PAWS or 350A Class G amplifier technology. Each ZADSC-02 controller can manage up to 8x loudspeaker lines - corresponding to 8 potential PAGA amplifiers. Each line can support up to 50x ZLSM devices giving a total load of 400 loudspeaker outstations per ZADSC-02 controller. The ZADS-ZLSM-02 outstation is connected between the 100-volt line network and the respective loudspeaker. Each ZADS-ZLSM-02 is given a unique address 01-50 which is assigned during installation. A ZADS supervisory speaker check can be carried out automatically at a pre-set time each day or manually from a graphical user interface terminal. The test duration for each loudspeaker fitted is approximately one second. Each loudspeaker line and each loudspeaker connected to that line is sequentially addressed in time division multiplex. Data communications is by secure signalling tones. The ZADS supervisory test commences with a low-level tone burst # which is broadcast by all loudspeakers for approximately 200ms. During this time the ZLSM is primed and monitors the associated loudspeaker. Following the test signal the ZADSC-02 addresses each ZLSM in turn to recover the loudspeaker status. Upon completion of the ZADS line scan, the system returns to quiescent. In event of a ZLSM failure to handshake, a fault report is logged and the host PAGA is signalled, the graphical user interface delivers a clear indication of the system status. In the event that the PAGA is engaged by a higher priority voice or alarm input, the ZADS test is suspended for the duration of the broadcast. Upon completion of the broadcast, the test will continue where it left off. The ZADSC-02 can configure the volume-tapping selection for each loudspeaker from the graphical interface. Four taps are available: A, B, C, D. Where tapping 'A' is the highest volume and 'D' is the lowest. This completes the introduction to our ZADS Addressable speaker system. Intelligent speaker monitoring for an industrial facility. 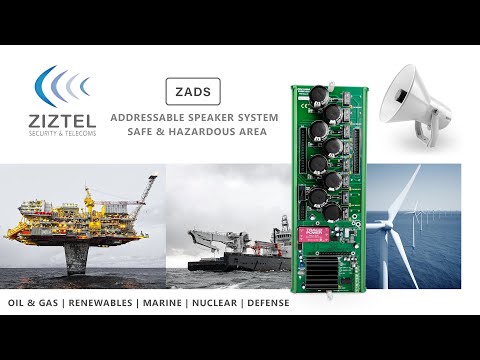